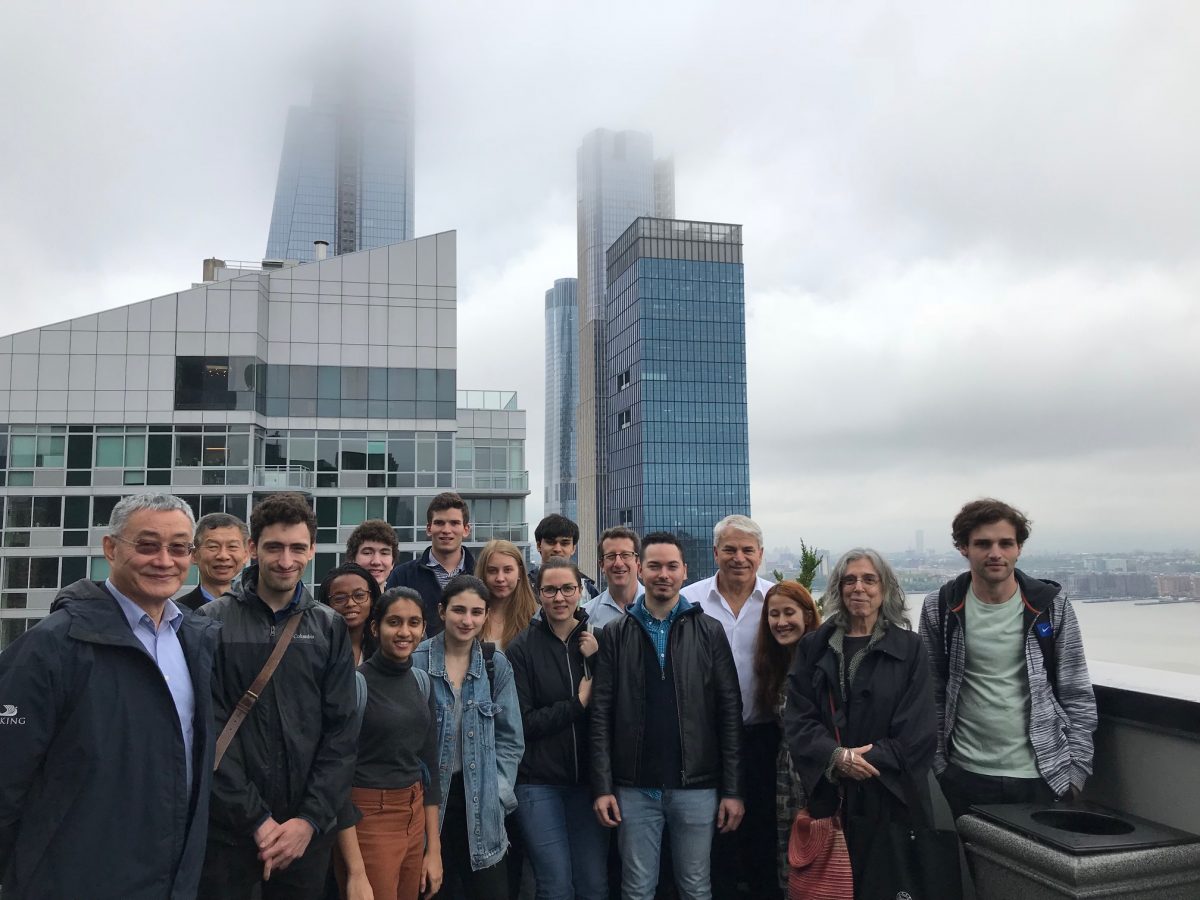 Students visited NYC on Friday April 26 as part of the Urban Studies course The Politics of Real Estate with a community learning component. Taught by Kelter Post-Doctoral Fellow Emily Yen, the course

examines the political, social, and economic dimensions of real estate in Hartford and New York. It delves into the tension between use and exchange values and how political context shapes the balance of power between stakeholders in these cities. On the trip, students had the opportunity to learn from non-profit, business, and academic leaders about the various stakeholders affecting real estate in New York.

The first stop was at Vera Institute of Justice, where alum Tyler Nims ’05, Executive Director of the Independent Commission on New York City Criminal Justice and Incarceration Reform, gave a talk about the work of his organization. The organization came out with a report in April 2017 laying out its blueprint for closing Riker’s Island jail complex. The real estate connection of this endeavor is two-fold: First, the commission must work to convince the planning and zoning commissions of New York City’s five boroughs to allow local jails to take the place of jails on remote Riker’s Island. Second, the commission must reimagine a purpose for Riker’s Island if the jail complex were to close. Students asked Nims many questions after his presentation about criminal justice reform and the impact of closing Riker’s Island.

Next, the group stopped at the office of Trustee Jeffrey Kelter ’76 P’18 for lunch and a discussion about his real estate projects. Kelter, who majored in urban studies when it existed at Trinity briefly in the 1970s, related his urban studies experience at Trinity to his real estate career. Several alumni who were involved with the Center for Urban and Global Studies (CUGS) at Trinity College and now live in NYC joined in at this stop. Among the alumni was Ezra Moser ’10, who spoke after Mr. Kelter about his work as a City Planner for the City of New York. Moser said he had always been interested in American cities and completed a self-designed Urban Studies thesis at Trinity. He turned the thesis into a chapter about Portland, ME published in Confronting Urban Legacy about Hartford and New England cities, a book produced by CUGS and co-edited by Nick Bacon’10, who also attended the lunch hosted by Kelter.  Ezra also noted that the mentorship of Dean Xiangming Chen and his experience traveling to China with CUGS encouraged him to take a global view of cities. A gift from Jeremy Moser and Laura Kittle, parents of Ezra Moser ’10, helped to support this trip.

The group was also joined by Sharon Zukin, Professor of Sociology at Brooklyn College and the CUNY Graduate Center, a distinguished scholar on modern urban life and a collaborator of the book Global Cities, Local Streets with Dean Chen. Zukin spoke about the disparity in income and housing costs in NYC and pointed to a few current debates in the city. One debate she highlighted was questions surrounding whether the Elizabeth Street Garden in Nolita (the neighborhood North of Little Italy) should be preserved as community green space or be developed by the city as subsidized housing for elderly LGBTQ+ residents.

Students were able to get another perspective on real estate in New York at their final stop, an apartment building recently built by Michael Fascitelli, father of Jack Fascitelli ’19, an Urban Studies major. Fascitelli and others involved in the project gave students a tour of the building, speaking to the many facets of real estate development in New York from the regulatory and zoning aspects to considering how to build community spaces. The building, named Henry Hall, is located a couple of blocks from the mega real estate project Hudson Yards and Fascitelli spoke to how his company was one of many developing real estate in the area in anticipation of the opening of Hudson Yards.

Students left New York after hearing numerous perspectives on real estate in New York, having added rich experiential knowledge to the urban topics they are learning about in the classroom.