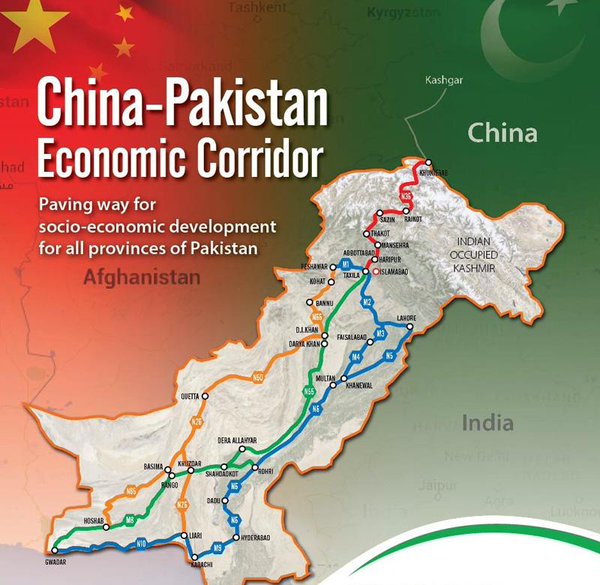 Even as more Trinity students carry out summer research project supported by funding sources at CUGS, it remains rare for students to conduct joint and complementary research on the same topic, especially in the field. This challenging proposition was realized during the summer of 2017 when three Trinity students from Pakistan did connected research on China-Pakistan Economic Corridor (CPEC, see map) from complementary vantage points and geographic locations. With one of the students (Malik Noor ’18) studying away in Cape Town in Fall 2017, the other two students summarize their work below. They will also present on their respective research findings at a mini symposium (see flyer) on CPEC as part of CUGS’ Global Vantage Point Lecture Series on November 28, with a commentary by Professor Shafqat Hussain of Trinity’s Anthropology Department who taught at Lahore University of Management Sciences, also during the summer. This marks an rare occasion where student field research in the summer, in a joint and complementary fashion, leads to a shared discussion with a faculty member sharing the same research focus and interest on campus.

I conducted local research on CPEC’s impact on three major Pakistani cities–Gwadar, Karachi and Gilgit–during July and August, 2017. During my field study, I noticed that CPEC has helped Gwadar (a small fishing village on the Arabian Sea) grow toward a modern city. There are roads, schools, and hospitals being developed only due to CPEC. Furthermore, Gwadar is developing as a modern seaport to handle heavy cargo containers from the United Arab Emirates and other Middle Eastern countries to China. Karachi is part of the CPEC project mostly because Karachi is already a large operating seaport. Gilgit, the northern most city in Pakistan, is beginning to benefit from CPEC that will provide stronger road connectivity to the city of Kashgar in Xinjiang, China along the old Silk Road. Other connective infrastructure projects under CPEC include a data cable for faster communication and strengthening security in northern Pakistan. In these ways, CPEC is a major potential catalyst for economic development in Pakistan.

My summer research in Pakistan this summer revolved around the birth and development and the unforeseen impacts of CPEC, which is a groundbreaking economic development project between Pakistan and China. My research was based in Lahore and Karachi, two major cities of Pakistan. I started off analyzing the social impacts of CPEC projects and Chinese influence on Pakistan’s cultural heritage sites, schools, social spaces and entertainment industry. China’s growing presence was seen as unsettling once but now, due to increased Chinese tourism, some Pakistanis have accepted and encouraged Chinese businessmen and tourists, while others continue to question China’s increasing influence in Pakistan. My research also led me to Karachi, the largest city in southern Pakistan, to interview officials involved with the CPEC Project in Gwadar, a prominent port city on the Arabian Sea, which is the focal point of China’s infrastructural project. I found out about the new development, the construction of gated communities, the emergency of five-star hotels and the corruption surrounding this massive project, in the port city of Gwadar. The socioeconomic, cultural, and political impacts of CPEC coupled with its increasing but disjointed development were an eye-opener. This strategic bilateral project definitely marks a turning point in Pakistani history of economic development.